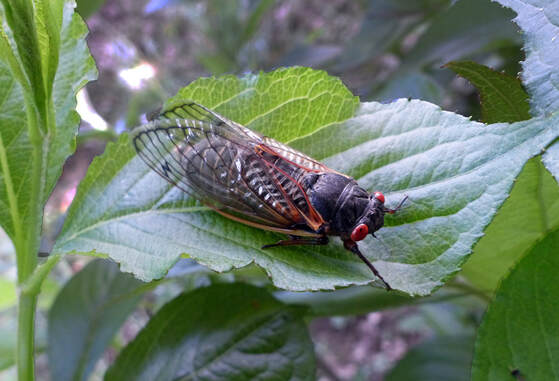 ​     Every 17 years in the Eastern half of the United States, millions of cicadas crawl out of the ground where as nymphs they have been sucking tree and plant roots and growing and molting (shedding their exoskeletons) for all those years. They molt five times and emerge in the fifth nymph instar. These cicadas are known as Brood X.   Brood X contains three species. The most populous and noisiest in the Washington, D.C., metropolitan area is the Magicicada septendecim. They are very loud!
Experiencing them is incredible. When the day warms up, their mating call is deafening.  They are everywhere – climbing up trees, shedding exoskeletons, darkening, and, as adults, flitting around between the branches and through the air. They are searching for a mate. The din you hear is the male’s mating song. When they all sing together, it can reach 100 decibels. They are able to make this noise because they have internal muscles called tymbals that buckle inward and produce a distinct sound. The abdomen is mostly hollow, which enhances the sound. Females do not sing, but they flick their wings to make a sound to get a male’s attention.
After a couple becomes a couple and mates, the female chooses a tree to lay her eggs.  She makes slits in a branch with her very sharp ovipositor and to lay her eggs in. After about 6-10 weeks, the nymphs hatch out and drop to the ground, where they dig into the earth and spend the next 17 years. And the cycle begins again.
Nymphs Emerging from the Depths
Click on a photo to make it larger. 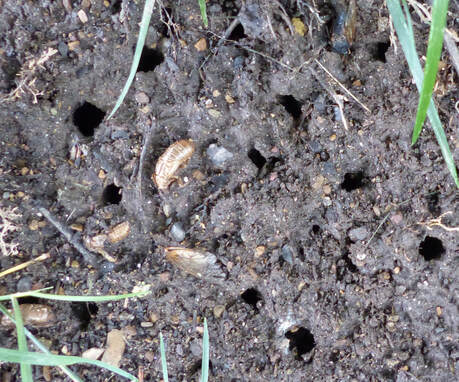 Lots of exit holes
​Shedding Exoskeleton and Emerging as an Adult 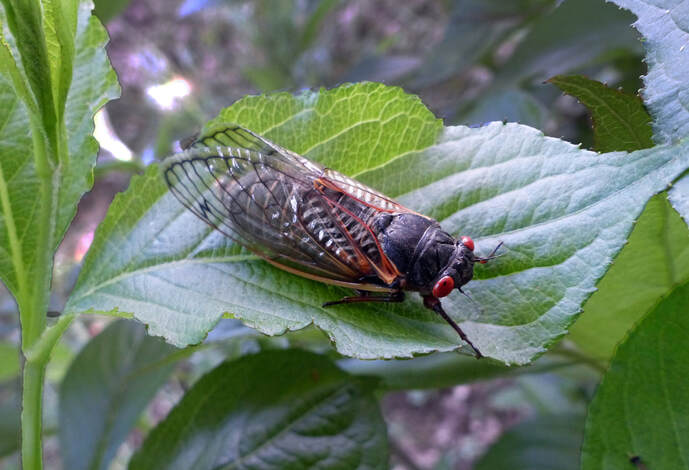 New exoskeleton hardened and darkened and wings ready for flying -- an ADULT! 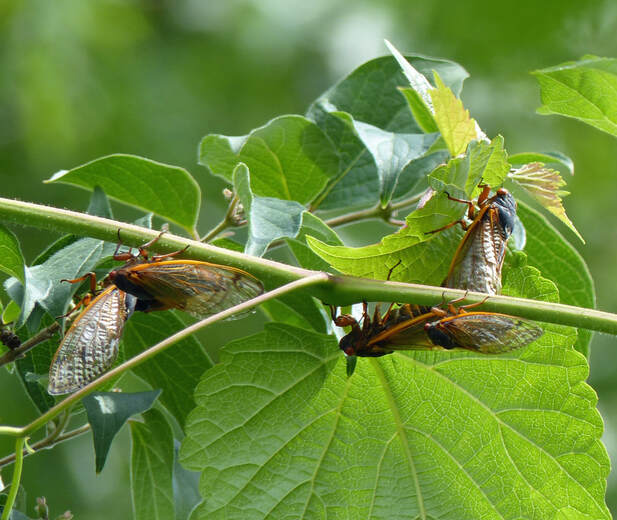 Finding a mate.
Mission Accomplished
Millions upon millions of cicadas emerge.  They live from 4 to 6 weeks. Many perish sooner because they appear to make a desirable snack or meal for many animals from birds, snakes, lizards, and fish to mammals such as rodents, opossums, and raccoons.  Even your cats and dogs will feast on them. Those cicadas that are not eaten will die. Those that have mated have fulfilled their goal of passing on their genes to the next generation. Mission accomplished! 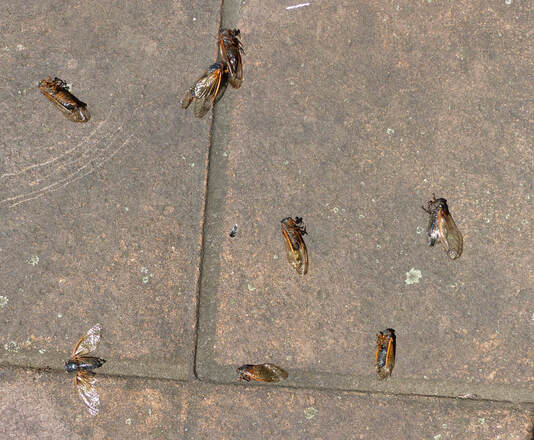 After a short, dramatic life above ground, adult cicadas die.
Exoskeletons are everywhere! 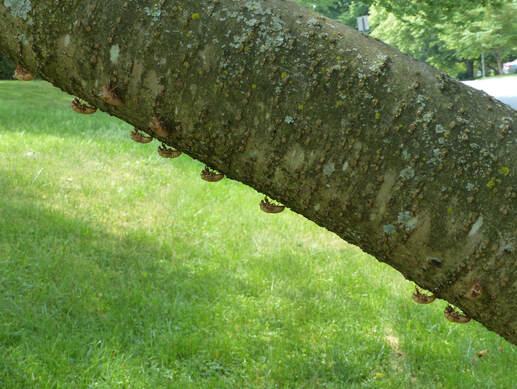 To be continued. . .
They have gone and I miss the deafening din.  I miss having cicadas bombard me as they haphazardly fly everywhere. I miss finding them in the house after hearing an unusual noise and looking until I find one I have unknowingly brought in with me from outside.
​
This page is not complete because I have no photos of cicadas laying eggs or nymphs emerging and dropping to the ground.  Maybe in 2038!