From Egg to Adult

​Insects have special ways of growing. They grow in stages, not continuously as we do.
Some insects go through 3 distinct stages after they hatch from an egg and have a totally different form at each stage.  This way of growing is called COMPLETE METAMORPHOSIS.
Other insects go through several stages as nymphs.  At each stage they become larger, but look somewhat like smaller versions of the adult.  When they make their final molt they become adults.  This special way of growing is called INCOMPLETE METAMORPHOSIS.

In complete metamorphosis, there are 4 different stages of development: egg, larva, pupa, adult.
​Click on a photo to make it larger. 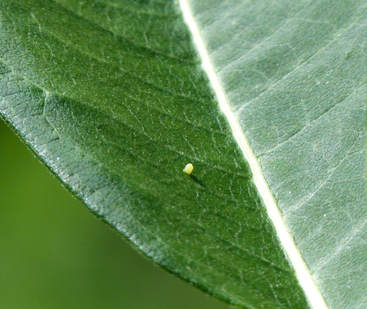 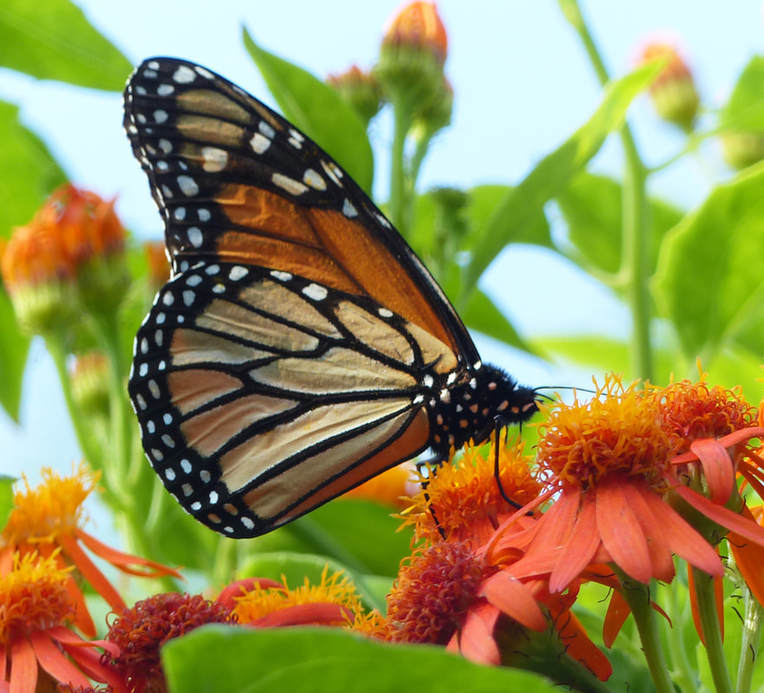 The adult female lays many eggs. Depending on the insect, they may be on plants, on the water, or sometimes inside another insect.  The location ensures that there will be food for the larvae when they hatch out of the eggs. 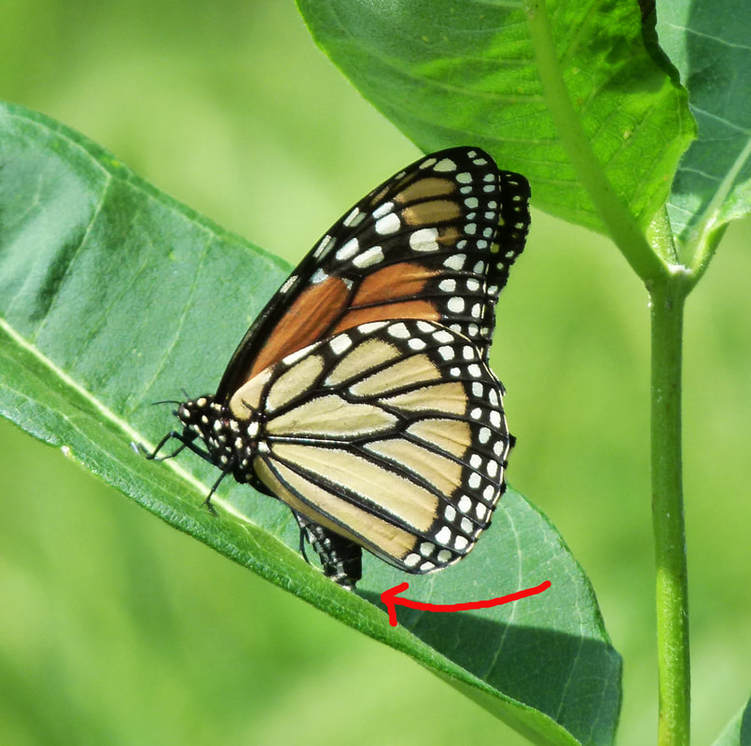 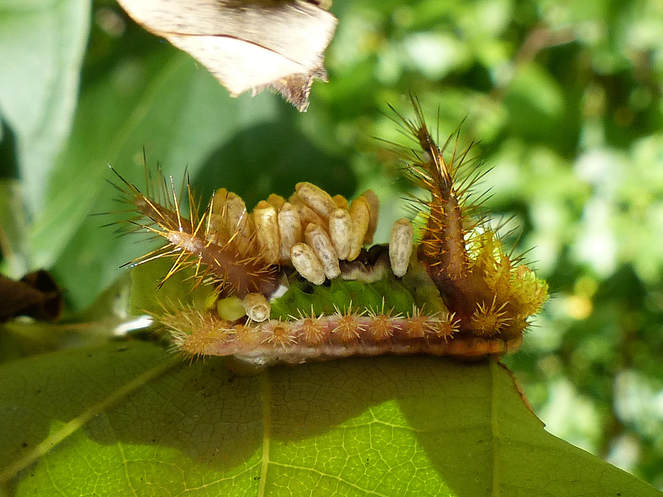 A Braconid wasp has laid her eggs in this Saddleback Caterpillar. The wasp larvae hatch and eat out the insides of the caterpillar. They pupate in the cocoons on her back and when mature, they break out of the cocoons and fly away, Seneca Landing, C & O Canal, Maryland

​After a period of time which varies with different species, larvae hatch out of the eggs.  Some of the adults these larvae become may surprise you. The larvae are often very different from the adults in appearance, habitat, and diet. This ensures that they will not compete for the same resources and helps ensure the survival of the species. 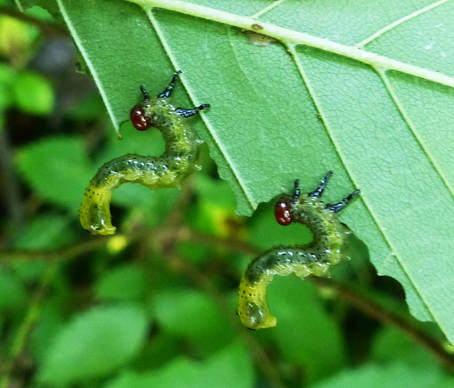 Dusky Birch Sawfly LARVAE (Craesus latitarsus) -- Although this insect is called a sawfly and it looks like a caterpillar, it is a wasp larva. (I took no photos of the adults.) 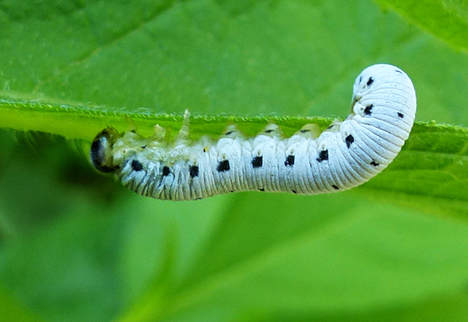 ​The following photos show the instars of a Spicebush Swallowtail Caterpillar (larva) that we raised in our living room.  You can see that with each molt it changed from looking somewhat like bird poop to a larger and larger sleek little caterpillar with big eyespots. 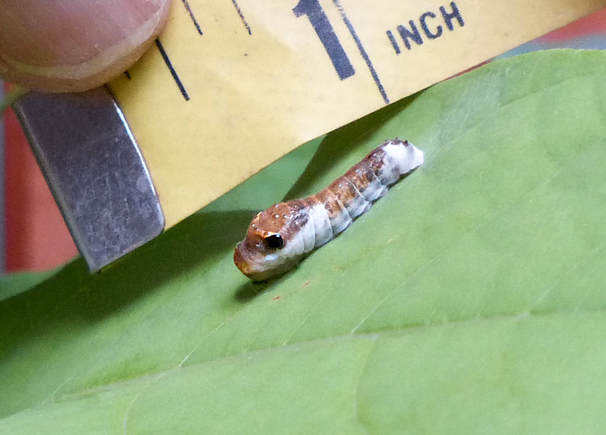 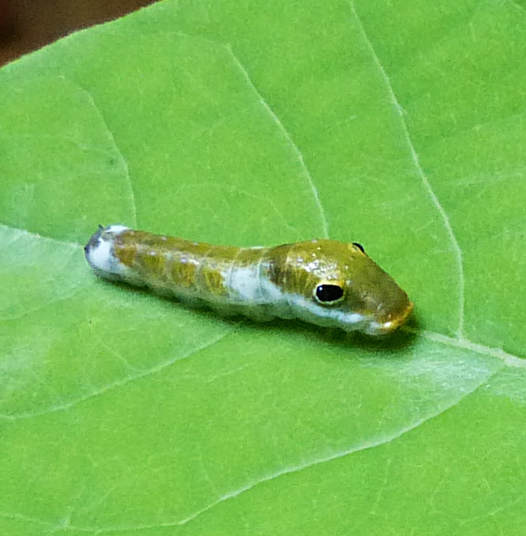 After molting, a later instar 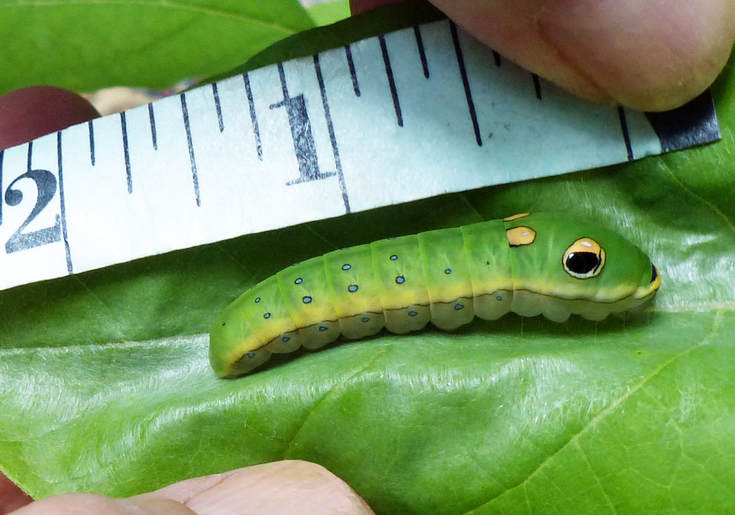 The last instar -- See how the caterpillar has grown and changed. Notice the eyespots on the thorax (back). The head is bent and hidden on the right.

​When the larva is fully grown, it stops eating.  It often attaches itself to a stem or leaf and prepares to pupate.  It wiggles out of its exoskeleton to reveal a pupa underneath.  Butterfly pupae are called chrysalids. Moth spin themselves a silk cocoon in which to pupate.

This seems to be a quiet stage, but it is not. Inside the pupal shell, except for structures such as the circulatory and breathing systems, the tissues of the larva are disintegrating into a cellular soup. Slowly the soup reorganizes itself into adult tissue.  When the pupa is getting ready to emerge (eclose) as an adult, the pupal shell sometimes becomes transparent and you may be able to see the adult inside.

​In the following photos you can see the Spicebush Swallowtail changing from a larva to a pupa. 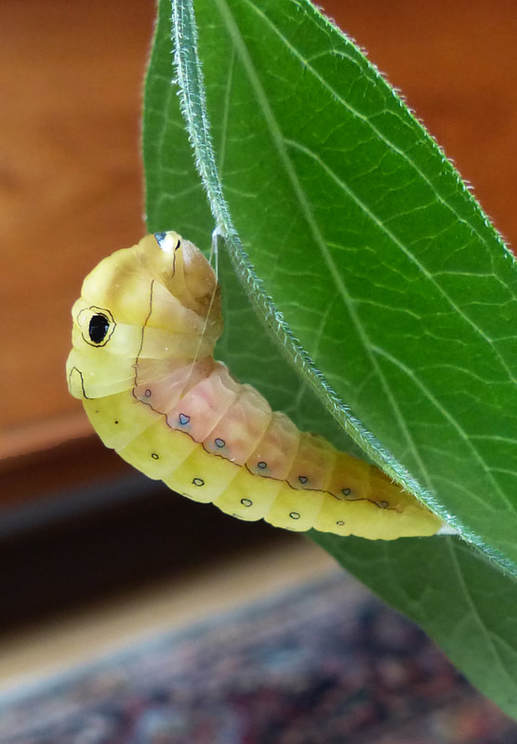 The caterpillar is in position to pupate. The eyespot is actually split, but because of the caterpillar's position it looks as if the exoskeleton is still whole. 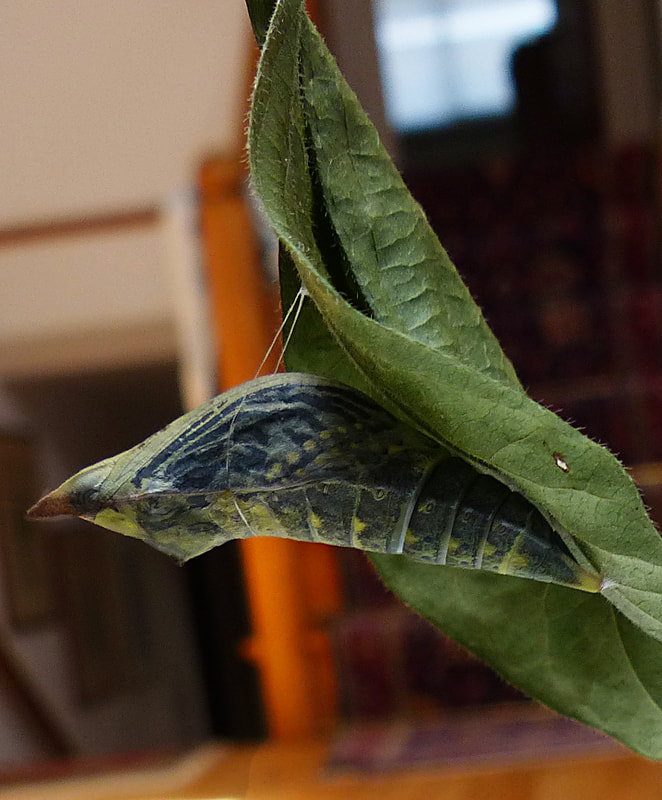 BAGWORM
​The bagworm is a moth which makes a bag of silk, adding pieces of twigs and other plant matter for camouflage. This provides protection for her as she eats and grows. She lives inside, but pokes out her head and legs so she can move around to feed.  She pupates at the entrance of the bag.

Bagworm (Thyridopteryx ephemeraeformis) PUPA hanging from the end of the bag she has spun and then encrusted with twigs of the tree where she eats. This keeps her well camouflaged. 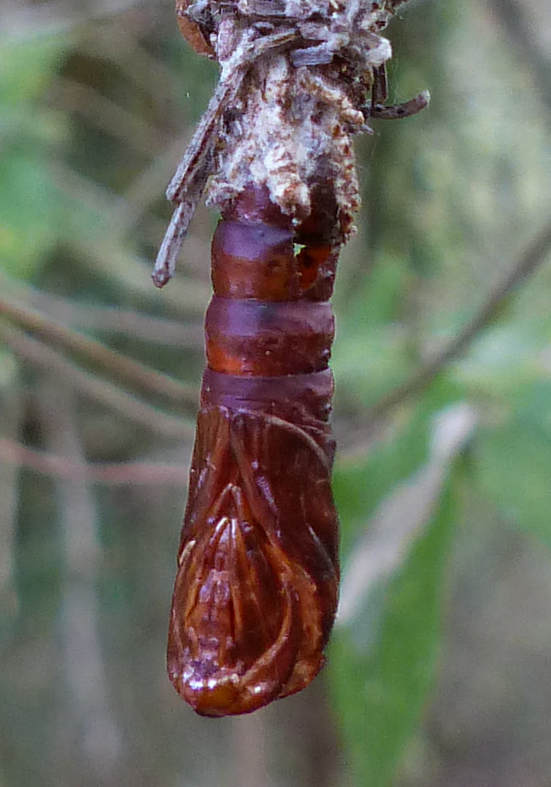 In this closeup of the Bagworm PUPA hanging upside down, you can see the antennae and wings of the adult moth which will emerge. 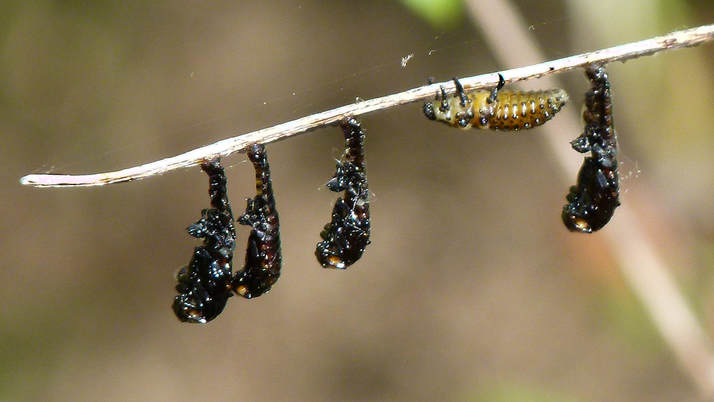 PUPAE of the Leaf Beetle hang from a twig as a Leaf Beetle LARVA moves along the underside.

Emerging as an Adult

After a period of weeks or even months, the pupal shell starts to split and the adult proceeds to pull itself out.
​
I have not included photos of the Spicebush Swallowtail emerging because it happened so fast that when I left to take a telephone call from our son and came back, the adult had emerged and I had missed it.  Alas.
Instead, I am including the pupation and emergence of a monarch butterfly which we raised in our livingroom several years earlier. 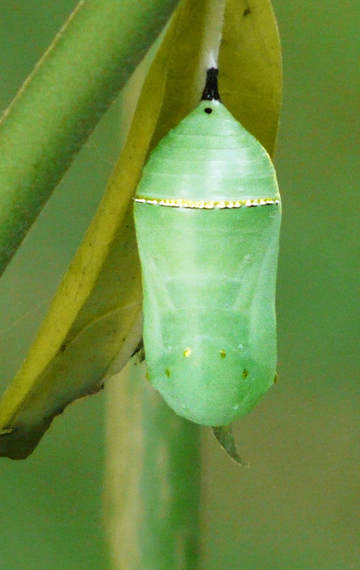 ​Complete Metamorphosis of Other Insects

​Here are some more examples of complete metamorphosis (except the egg which I didn’t find to photograph).
HACKBERRY EMPEROR BUTTERFLY 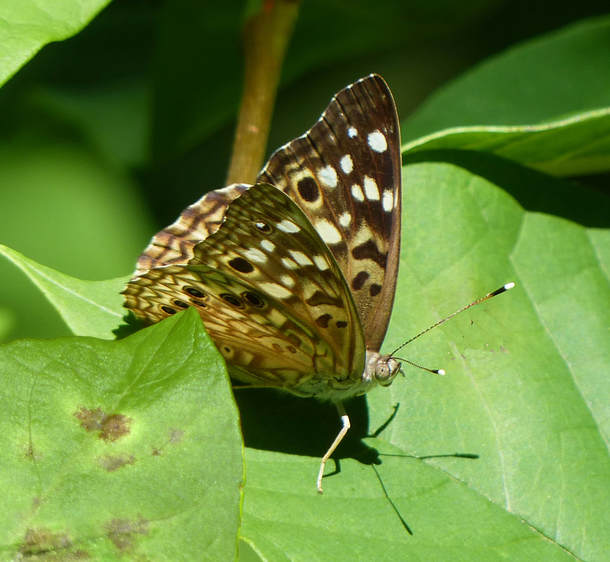 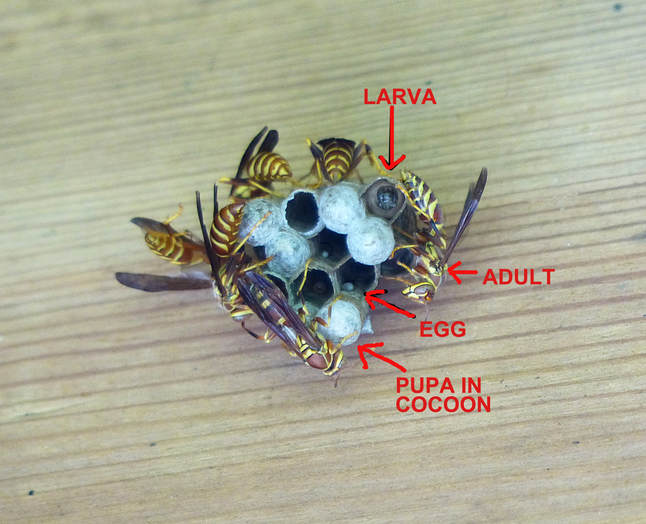 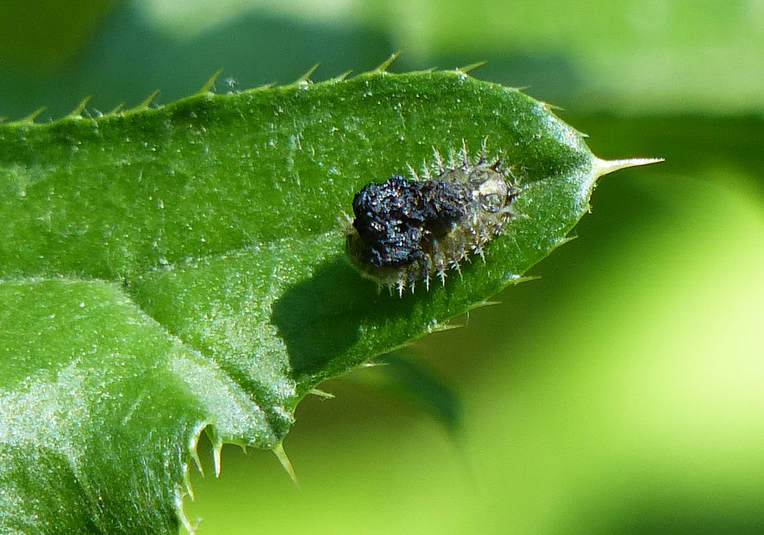 Tortoise Beetle LARVAE carry some of their excrement on their backs, probably to both hide from and deter enemies. 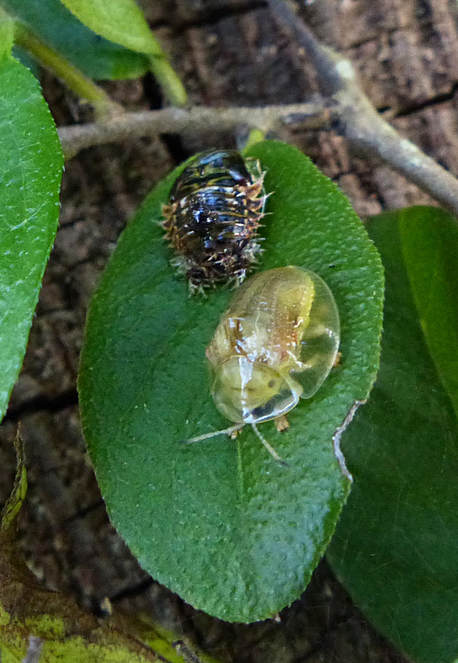 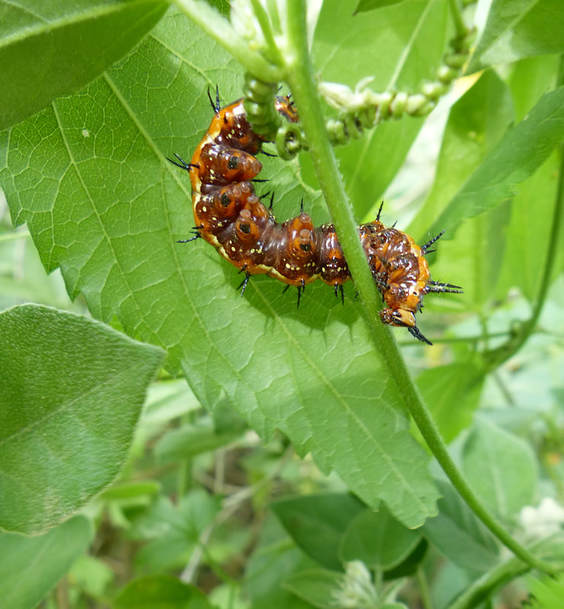 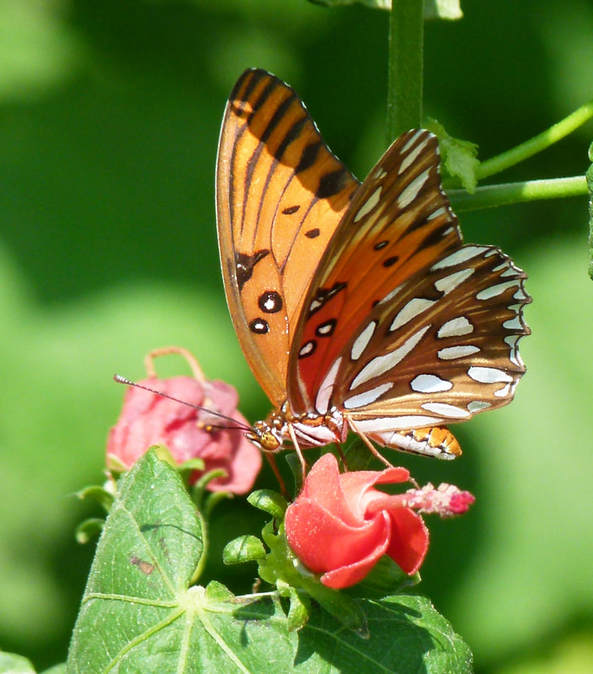 An ADULT Gulf Fritillary
LADY BEETLE
Lady Beetles or Ladybugs as they are often called, are so familiar we hardly pay attention to them, least their various growth stages.  Here they are! 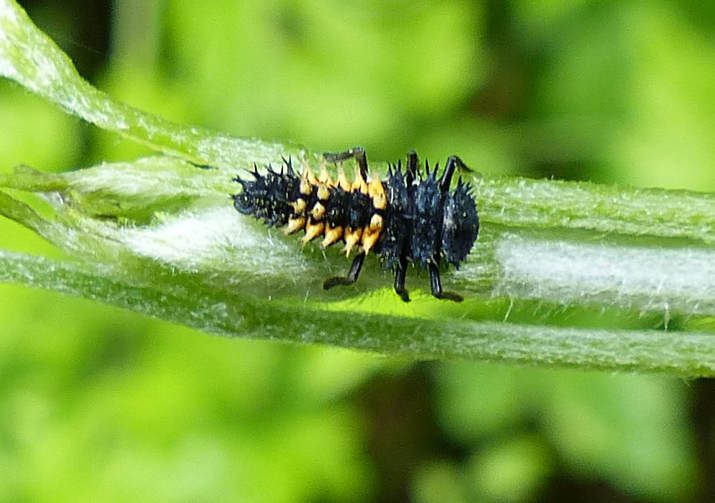 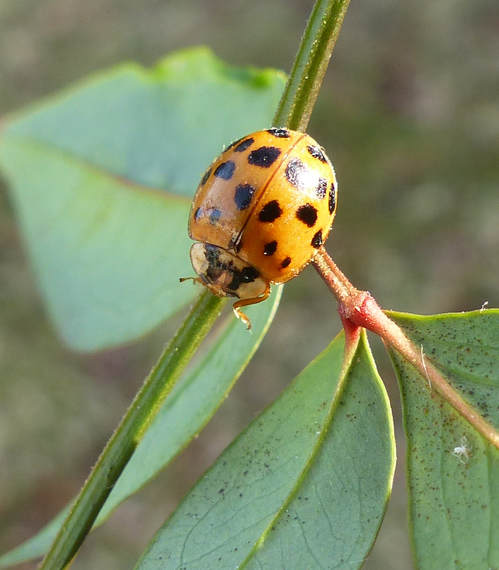