​Incomplete metamorphosis differs from Complete Metamorphosis.  As in Complete Metamorphosis, insects undergoing incomplete metamorphosis hatch out of eggs.  However, they hatch out not as larvae but as nymphs. Nymphs are an immature form of the insect that grows larger but does not change greatly as it grows and molts. And nymphs do not pupate before they emerge as adults. Instead they molt many times until their final molt when they become adults, have wings, and can mate.
Click on a photo to make it larger

​Let’s start with the eggs.
These photos show insect EGGS as well as the nymphs that have just hatched out of them. Notice the openings in the eggs where the nymphs hatched out. 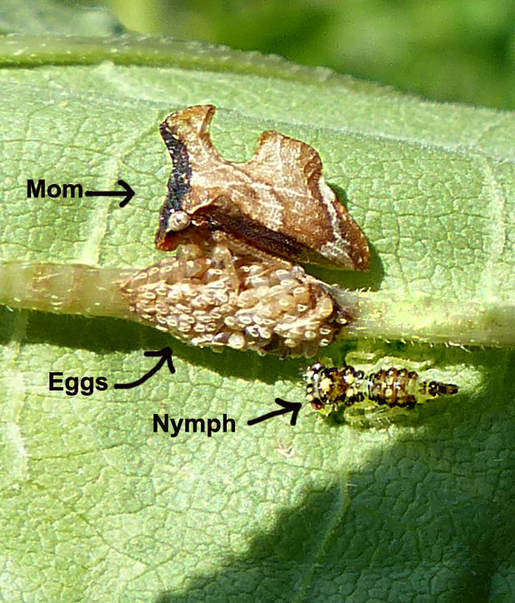 A Treehopper (Entylia carinata) ADULT, protecting a cluster of her EGGS, and a NYMPH

​Nymphs eat and eat until they grow too large for their exoskeletons and must molt. Their exoskeleton cracks open and they emerge as a larger nymph.  This happens many times. Each new stage is called an instar.
ORANGE ASSASSIN BUG
​HELMETED SQUASH BUG
MORE NYMPHS
​Here are a group of assorted beautiful and slightly weird-looking nymphs. Notice that they have small wing buds instead of wings. They cannot fly. 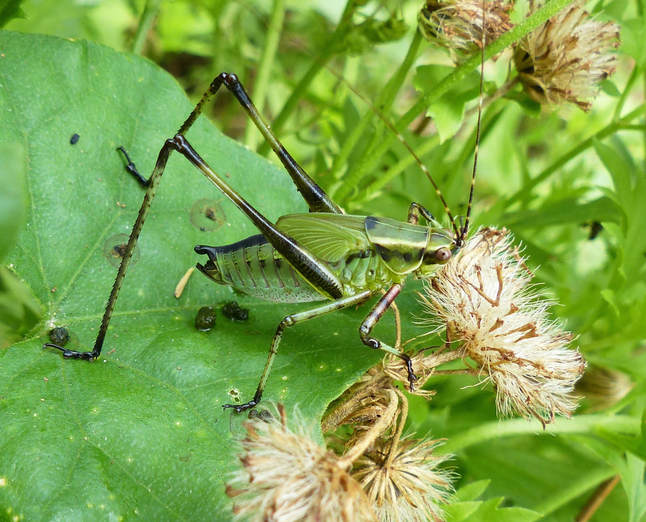 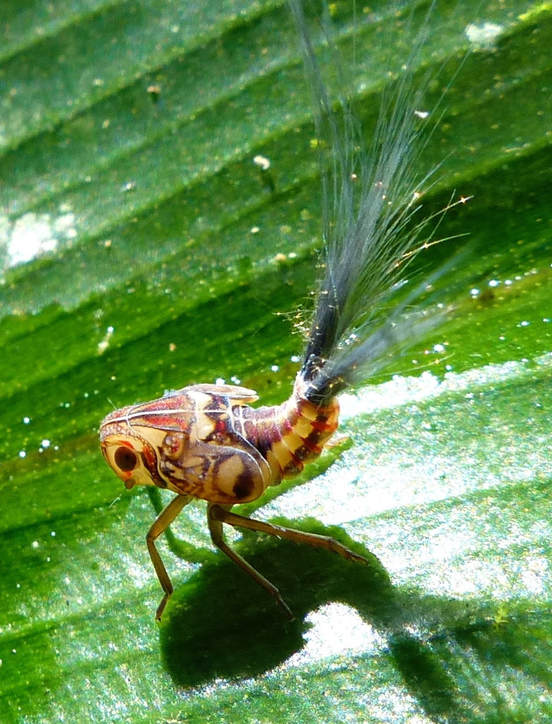 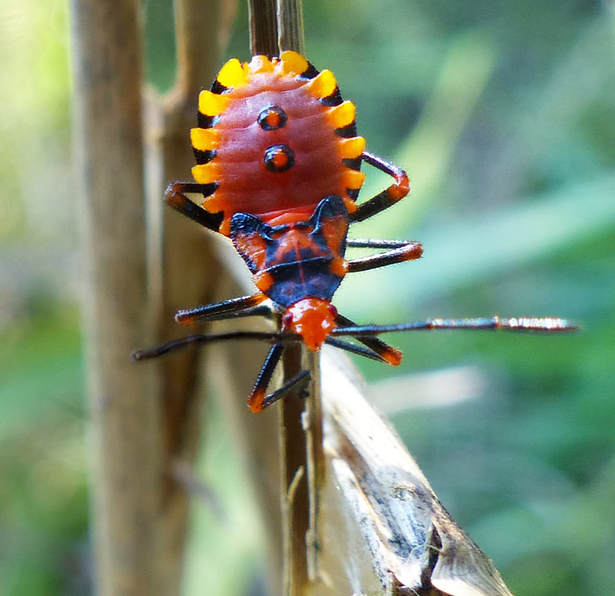 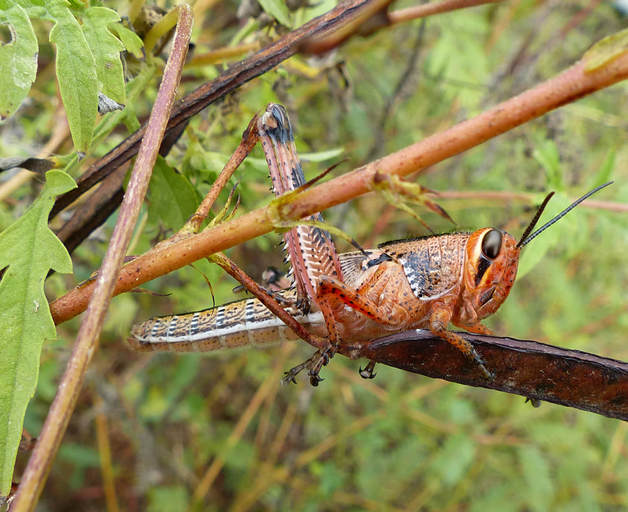 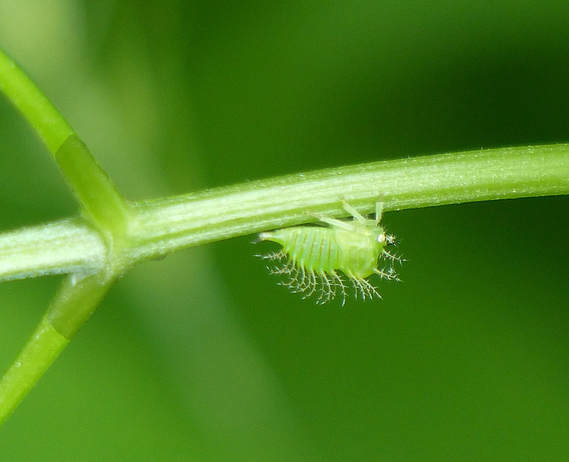 ​When they pull themselves out of their exoskeleton for the last molt, they are no longer nymphs. They have become adults. They have wings and can fly and can mate.
Here are some exoskeletons. The exoskeleton split open at the back of the head or thorax (back) and the adult slowly pushed itself out. 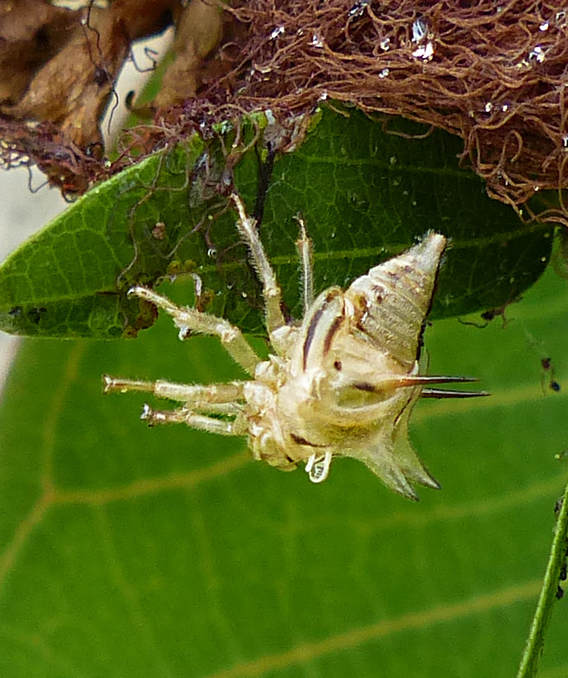 ​
​Emerging as an Adult

​In the photos below, the ADULT Florida Predatory Stink bug (Euthyrhynchus floridanus) is emerging from its EXOSKELETON.  In the first photo, the ADULT (red) has almost freed itself from its EXOSKELETON (black). You can see where the exoskeleton has split open at the thorax. The stink bug’s new adult body is red but will change color as it dries.
​FLORIDA PREDATORY STINK BUG 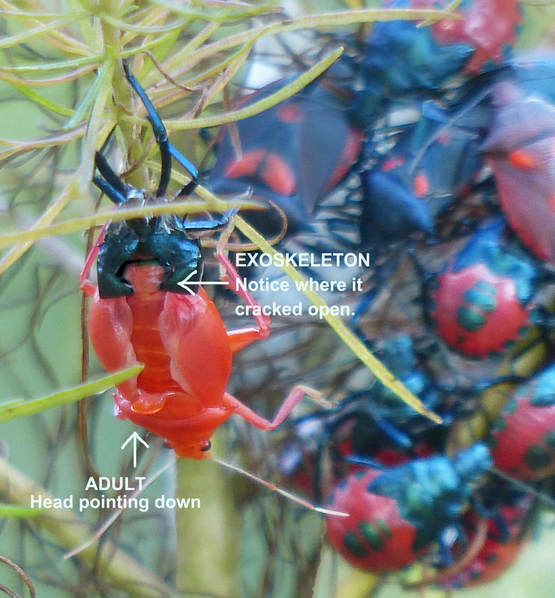 In the photo below, you can see that the ADULT (red) has emerged a bit farther because its wings are now freed from the EXOSKELETON. 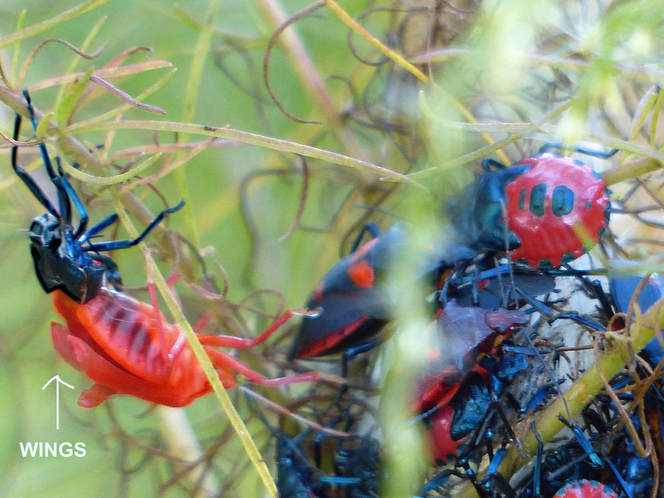 ​Below, the ADULT (red) has completely pulled itself out of the empty EXOSKELETON (black). 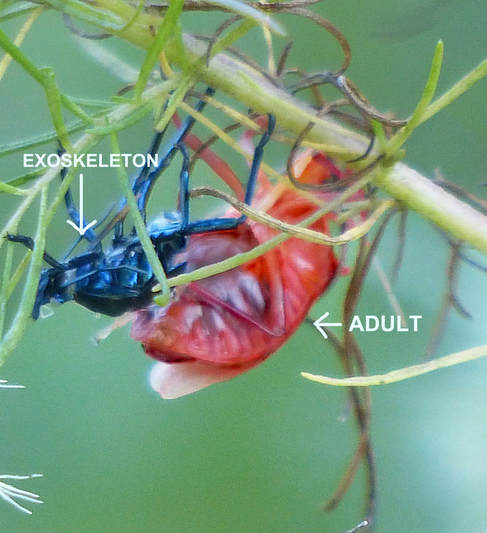 ​In the final photo below, we see an ADULT Florida Predatory Stink Bug.  Its new exoskeleton has hardened and has become black and orange.  It has wings, can fly, and can mate. 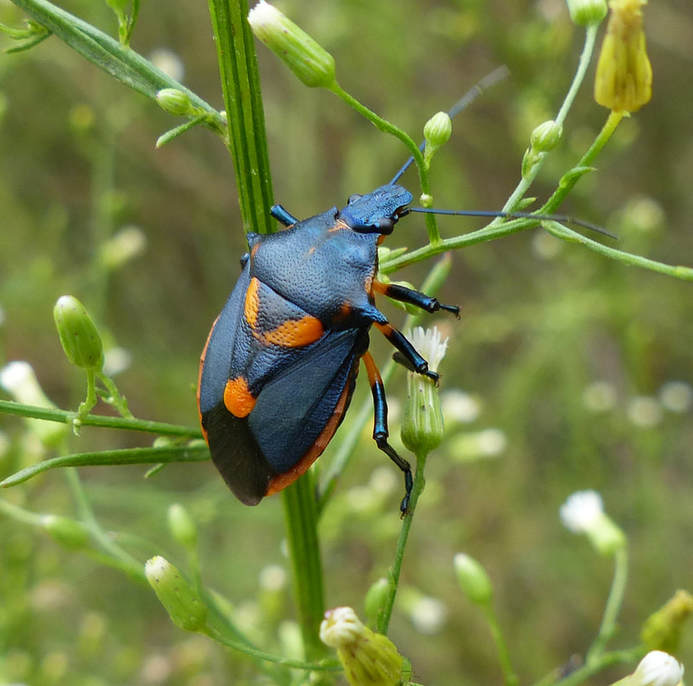 ​CRICKET
The adult cricket on the right below has just emerged from the exoskeleton on the left above her.  Her wings are still furled and have not dried yet. 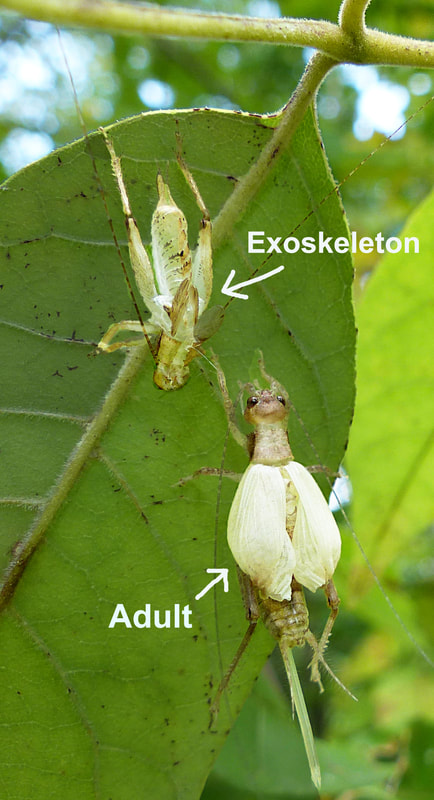 ​More NYMPHS and the ADULTS they become
​ 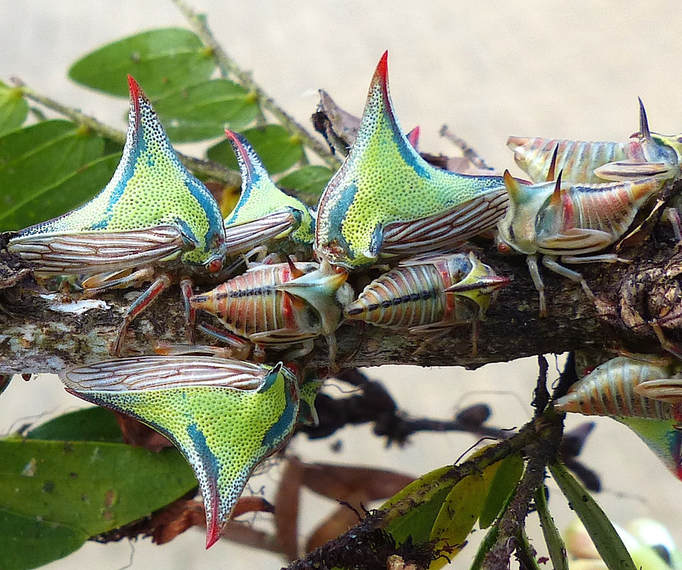 Treehoppers are small, bizarre-looking insects that live on branches and stems.  They often resemble thorns -- an effective camouflage to help them escape detection by predators. Treehoppers seem to have maternal instincts!  Perhaps I am giving them human attributes, but see what you think:

The first photo below is a mama Oak Treehopper (Platycotis vittata) on a tree trunk guarding her eggs. You can see them in the slit above her. In the next photo, a nymph seems to be playing with her, riding on her back. 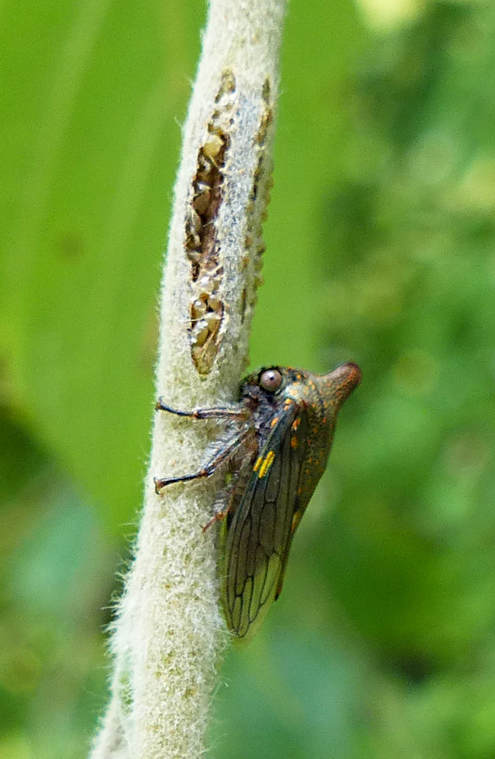 An ADULT FEMALE Oak Treehopper has laid eggs in the slits cut into the tree trunk. 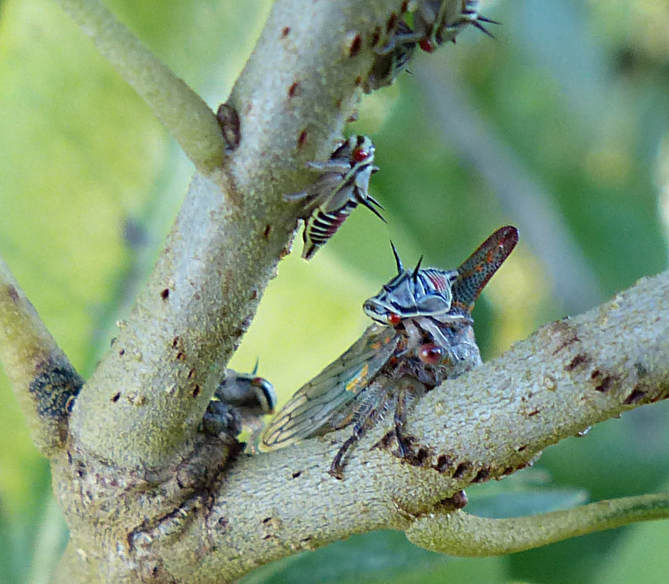 Look at the Oak Treehopper NYMPH playing Piggy-back with her mother!
PROOF OF THE PUDDING
According to the University of Florida Entomology site: In 1930, a Kansas entomologist, Raymond Hill Beamer observed maternal instinct in females of Platycotis vittata on oak in California. Females were observed to "stand sentinel" between their respective colonies of nymphs and the body of the tree. A female would allow herself to be picked up rather than fly away from her perch. Beamer watched one female repel a small vespid wasp approximately a dozen times from her colony of nymphs. After the vespid apparently grew discouraged and flew away, "...the membracid flew to her young, crawled over the spot where the vespid had alighted, apparently examined to see that they were uninjured; then making sure all was well again flew to the twig just below the nest, turned her head toward her young and stood immobile."