​Many totally harmless insects derive protection because they look like insects that sting or bite.  Others look like insects that taste bad or are poisonous and thus are also left alone. This defensive mechanism is called MIMICRY and is very effective in keeping animals safe.
MIMICS OF INSECTS THAT STING OR BITE
​As you can see in the WARNING COLORS section of Insect Defense, insects with bold stripes or bright colors are announcing to predators that it isn’t even worth trying to eat them. They will either defend themselves by stinging or biting or taste bad.  Mimicking these dangerous insects is an effective defensive device.
In the following section, try to figure out which insects are dangerous and which are mimics. Think of yourself as an insect predator. See if you are fooled.​
​​Click on a photo to make it larger.
Wasps? 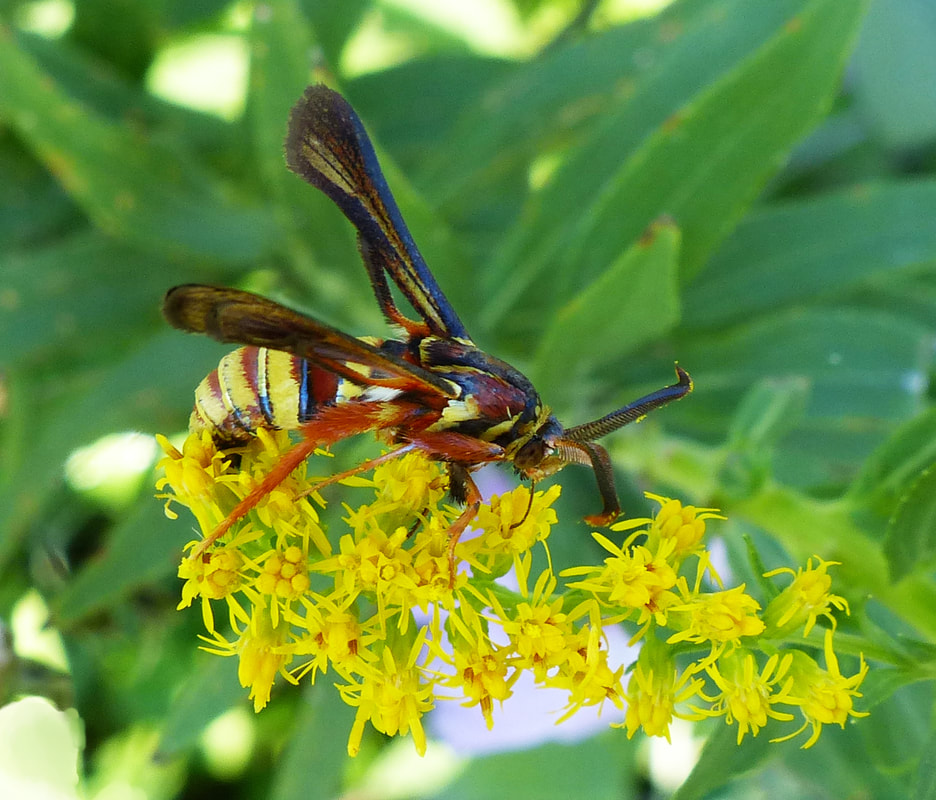 Can you believe this is a Clearwing MOTH (Vitacea admiranda) and not a wasp? 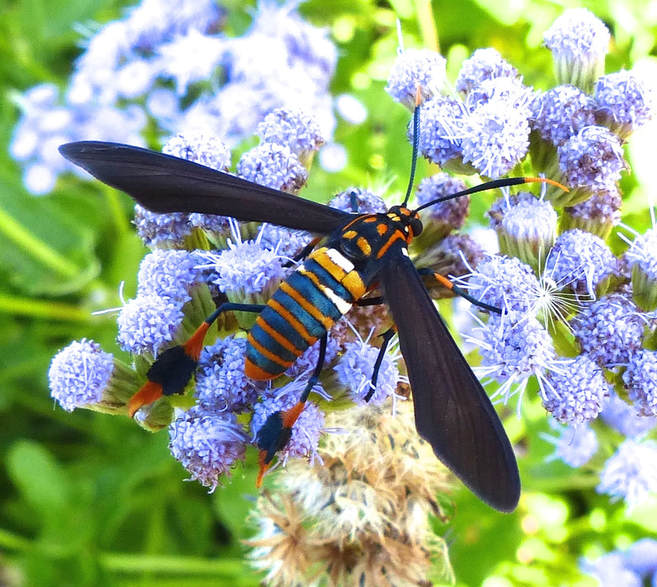 This brightly striped Texas Wasp MOTH (Horama panthalon) would probably fool a predator.
Which of the three "wasps" below is a Paper Wasp? 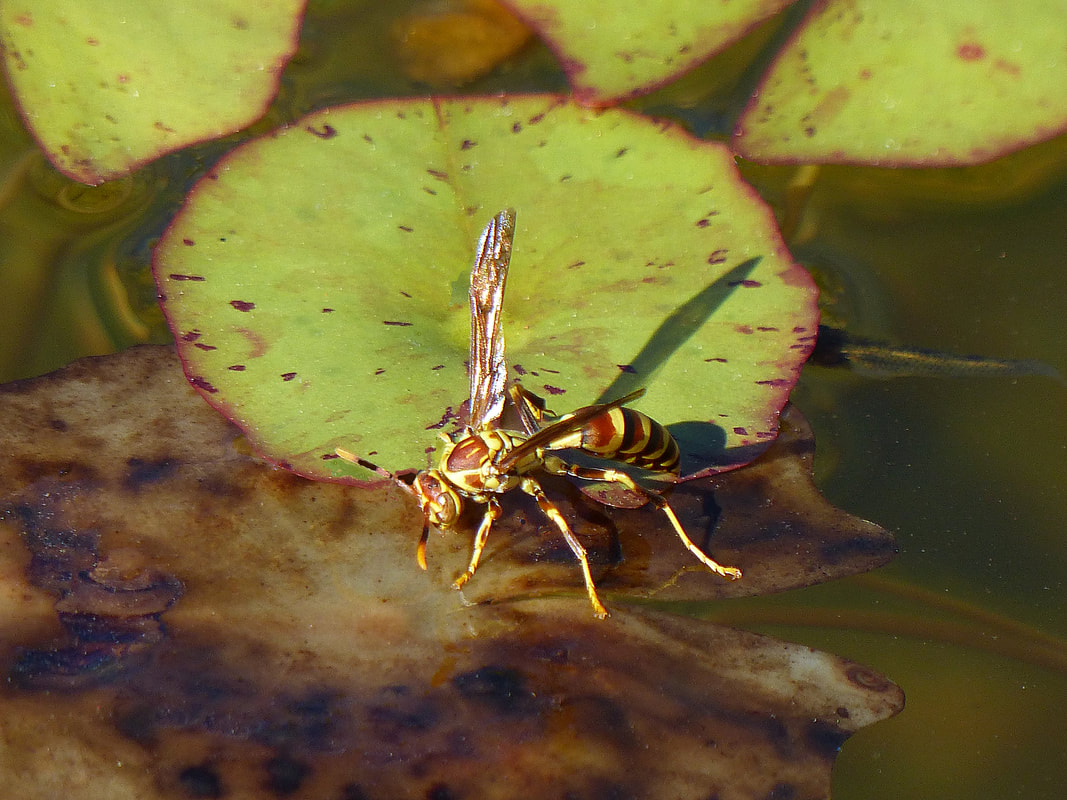 Wasp?
Wasp
​The insect drinking in the first of the three photos is the only wasp.
Fly 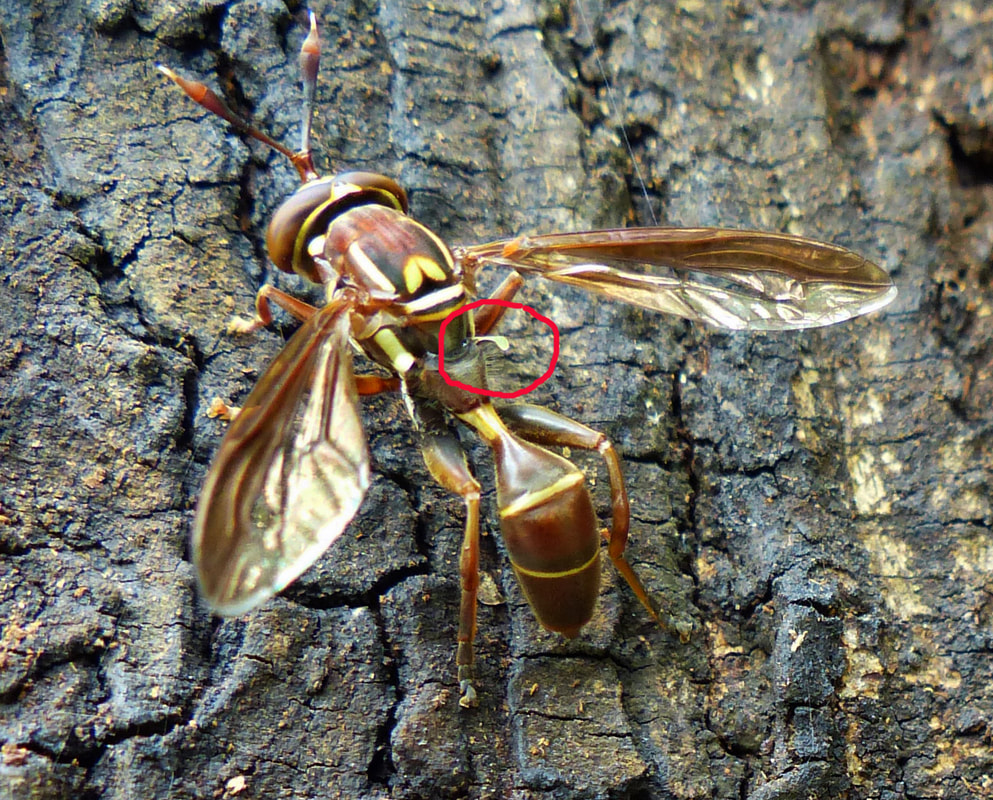 This wasp mimic is a Syrphid FLY (Polybiomyia schnablei). Notice the circled haltere. Halteres are modified wings that you find only in flies. Wasps have two full sets of wings.
Mantidspid 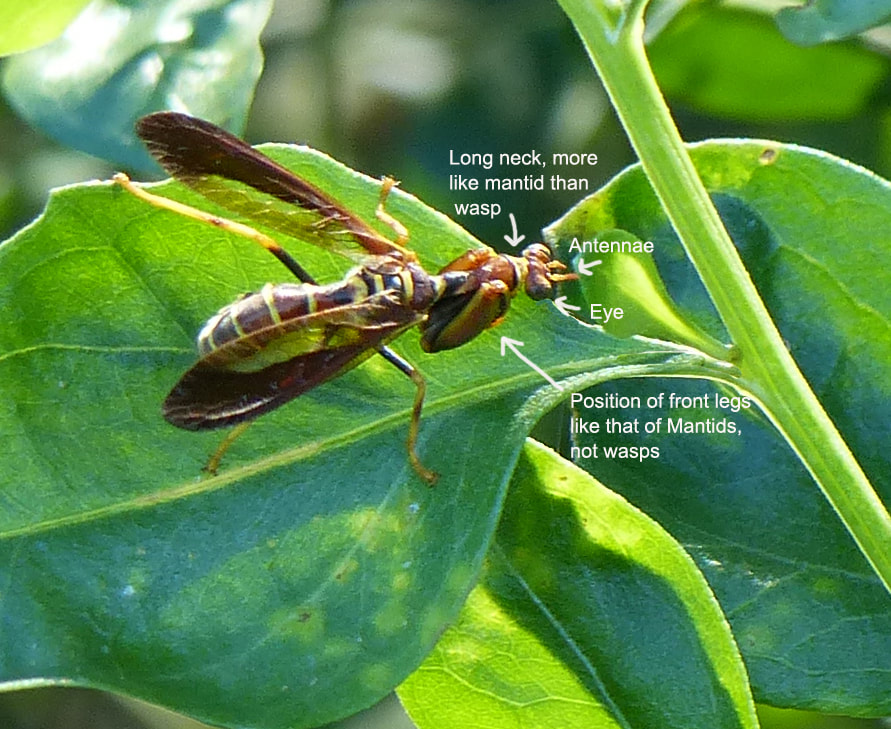 This strange looking mimic could easily be mistaken for a Paper Wasp, but it is a MANTISPID (Climaciella brunnea).
I first saw a MANTISPID on a bush in Florida. I thought it was a wasp, but a very strange-looking wasp.  Upon closer inspection, I saw that the front legs were all wrong and the head seemed to be above the body. Where did the neck come from? Wasps don't have necks. Of course, it wasn't a wasp. This wasp mimic is a member of the Mantispidae family.
​
Honey Bee or Bee Fly?
Wasp or Beetle?

​MIMICS OF INSECTS THAT ARE DISTASTEFUL OR POISONOUS
In the WARNING COLORS section, you saw a variety of colorful insects that eat plants containing poisons, store the toxins in their bodies, and become poisonous or distasteful themselves. Predators learn to associate their bright colors with bad tastes or even harmful physical reactions and learn to stay away from them.

There is a whole group of insects that are perfectly palatable, but look just like or mimic those insects that are distasteful. As with mimics of stinging or biting insects, these insects also derive protection from looking like insects to avoid.
Which Butterflies Should Predators Avoid?
Monarchs
Monarchs feed on milkweed, which contains chemicals that are toxic to some animals.  Both the larvae and adults eat milkweed, sequester the toxins in their bodies, and become toxic to predators. Their bright orange and black coloring is a warning to any animal that is considering making them a meal.

Viceroy Butterflies are convincing mimics of Monarchs. They derive protection from being mistaken for Monarchs.

MIMIC OF AN INSECT ​THAT BITES, STINGS, AND TASTES BAD

Ants are a member of the Hymenoptera order, which includes wasps, bees, and ants.  Ants sting, bite, and contain bitter formic acid. They appeal to few predators. Mimics of ants are many -- among them are beetles, flies, spiders, and true bugs.
Two Ants?
The insect on the left is a BUG NYMPH - A Texas Bow-legged Bug (Hyalymenus tarsatus) nymph. The insect on the right is an ant.  Incredible mimicry!!!